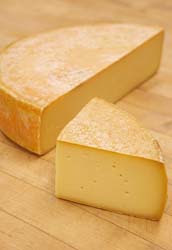 You've probably heard of fondue but have you ever heard of raclette? I hadn't until this summer when a friend of ours introduced us to this European dining experience.

Where to start? Well for one, raclette is a cheese and it's the table-top grill that cooks the cheese. The whole thing started with Swiss peasants when they'd melt their cheese over the fires in the field to eat with their bread and like all things rustic eventually the tradition became chic and found its way to the tables of the trendy middle class because, after all, what's not to like about melted cheese? 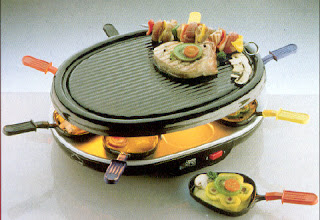 Which brings me to raclette today. Instead of open fires you can buy an electric raclette appliance which does the work of the fire. The grill sits in the middle of the table and has two levels: the upper level holds a hot plate that can be used to toast bread or rest your raclette pans when they're not in use and the bottom level has a place to put your little raclette pan when you want to melt the cheesy goodness all over your selected items.

You place a piece of cheese in the pan, stick it in to broil on the bottom then slide it out of the pan with your little fancy squeegee thingy onto your food. Traditionally the cheese goes with bread, boiled baby potatoes, prosciutto, pickled onions or gherkins but you can also add broccoli, tomatoes, peppers, mushrooms, pineapple, pears or apples. Just now it occurred to me that I bet this baby would even make some pretty mean s'mores should the craving ever arise.

After our raclette meal this summer I knew I wanted one (because I need more kitchen gadgets) and began shopping all over the internet to find the right gear. It was tricky at first because if you don't spell the word correctly it throws off your search but once I had it right I found that Amazon carried many different models of which the Hamilton Beach version looked to be the overall best deal ($70 on sale) and had received good reviews on other sites.

Though they come in other sizes you'll want an appliance with eight pans because the beauty of raclette is that it's a completely social experience. The cheese takes time to melt so you eat slowly with opportunities for conversation--why we Americans snarf down our food is something that I'll never understand--plus it can be as casual or as swanky as you care to make it depending on your accompaniments. You'll want to make sure you have room for guests.

It also makes a fun, quick, nutritious meal for the family. All you need is some cheese, bread, salami, maybe some potatoes or gherkins for variety and you've got a dinner that goes together in minutes that your kids are going to love. Make-it-yourself creations always score lots of points. Hmmmm . . . would I sound too white-trashy if I suggested that my kids would want to use this to make nachos for dinner? Heh, there's irony in that--using a fancy European raclette to make nachos. But my point is, the possibilities are endless.

I'm asking for one of these for Christmas (did you get that Andrew?)

i love the raclette. we use to have a good raclette every new years day. i just cannot get enough.

I was in France on business once about 10 years ago and was invited into someone's home for dinner and they served raclette complete with potatoes and pickles We had a wonderful time.

Enjoy yours if you get one for Christmas!

What's French for "I'm drooling now"? Because I am. (Furiously adds raclette to Wish List, under light box, but above knitting needles.) You are a cultured lady, m'dear.

YUM! Yum, yum, yum. I spent a semester in Grenoble, France, which is Alpine enough to have raclette. SO good.

wow, I think that I'll have to try that. Any excuse for melted cheese! I hope that you get your for Christmas!

You're making me hungry. I love CHEESE!

It makes me wish I had friends or family who would appreciate sitting around doing something like this as much as I would.

I've heard of these and would love to try one before I buy one. Sounds too wonderful, though! Hope you get it!

Now see...I already have an abundance of kitchen gadgets. Last year it was adding the krumkake baker to my arsenal so that I could make those thin, krispy, scandinavian cookies rolled into cones, and of course I also got the rosette set so I could make deep fried rosette cookies...I don't know if I have room for another appliance...but I am tempted!

I tried it once many years ago in the France. Now I'm craving it! *sigh*

You all are so much more informed than I am, it was all new to me but really fun.

My french teacher in high school used to make raclette for us on each end of quarter day throughout the year. She always made them with baby potatoes - yummy!

I was a missionary in Switzerland and ate this on a fairly regular basis during the winter there. It is truly divine. You must try it will very small boiled potatoes though. Yum!

My sister lives in a village in the Alps of Switzerland (and I am going for a visit next week!) and we love raclette! I brought one home with me 17 years ago, and it was an instant hit with everyone, and is especially useful for unexpected guests...it is easy to find something to grill on top, although we usually do it the Swiss way with potatoes and gherkins and silver onions. Now you can get them everywhere here in England! Wonderful!

MY FAVORITE TOPIC!! You know that I have Cheese flowing through my veins, right!?!? Raclette is my favorite food! I LOVE it! It is the best when you can have it from a half of a wheel and it is melted at the fire, but THIS IS the next best thing (and much faster process). I LOVE it! I grew up with these machines and have one of my own. It is soo much fun to entertain. You stay at the table for ever! And soo much fun!
Paprika on the cheese makes it super yummy!
Can you find the raclette Cheese near you? or what do you use!
I hope Andrew got your hint!
IN French, I AM DROOLING = JE BAVE!
;-))

J'adore raclette! I hope you get the machine for Christmas (or, better yet, before! It could make for some fun holiday get togethers--so easy!). Thanks for doing the research. We have eaten it when visiting relatives, but never bought one for ourselves here in the States. I'm going to put it on my wish list, too!

I've never heard of this but it is the COOLEST idea. We're a cheezy kinda family so methinks I need to investigate this. Yummy.

This is our favorite dinner to serve when we have friends over...It's easy and fun and very, very good if you are a melted cheese lover like me! :)

i love raclette. i lived in france for 18 months, and i enjoyed that many many times. i have to say though that the raclette cheese that you get here is just not the same as the real stuff in france. and we always had a huge choice of meat to cook. i have to say that i didn't realize that they had them in the US. i may have to buy one!! and i just love almost everything that is french.

I love little things, and those little broiling pans are calling to me. And what little kid wouldn't want to cook his own little dinner in his own little pan?

wow, what a neat appliance! i think i NEED one of those too!

Mmmm. We could all use a bit more cheesy goodness.

These are so cool! Like a sophisiticated version of the old fondue pot. Raclette is a great excuse for breaking out the Pictionary and having a party. And in a pinch, you can cook a quesadilla in one of these babies.

Raclette is great! I love it too, and how couldn't anyone love it. There is a great book out on raclette called The Insider's Guide to Raclette and I have seen it just then on ebay. That book is great because it explains the whole thing, history and all (and raclette is actually four things, not just the two!) and has as the second part a cookbook with plenty of great ideas and pictures. Love it! Oh, it is from Raclette Australia, a name that you're bound to bump into when you do some research.

I encountered one of these for the first time at a British friends house in Belgium. They use theirs ALL the time, for literally EVERYTHING. This reminded me of that experience and how fabulous it was. I am putting one on my Christmas list. Right. Now.