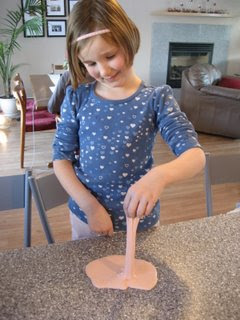 Who says the educational system in America is broken? The other day Spencer came home from school foaming with excitement because they'd had an art project (or maybe it was a science project, that part isn't entirely clear) where they made flubber. At least that's what he called it.

In fact he had so much fun that he wrote down the recipe as best he could remember it (which is saying something right there--when was the last time your 11 year-old son wrote down a recipe?) He gave me a shopping list of things to buy so we could make it again ourselves and you, good people of the internet, you get to enjoy the fruits of our labors.

May I present: Flubber.

I found that I already had a recipe for it in my dusty books and it's not hard (the recipe pops up here and there all over the place, you may have already seen it) you'll just need to buy a box of Borax (available any place that sells laundry soap). The great thing about this stuff is it's gooey and slimy but can break like Silly Putty. It mends itself like Playdough if you put it back together and can drip like a liquid if you let it.

Which reminds me, don't leave it on the carpet or any place where it could run down into a crack or something. Very, very bad. Very bad.

The kids had hours of fun with it and it keeps for a decent amount of time in a plastic bag. Here's what you'll need:

Pour the whole bottle of glue into a big bowl then fill the empty bottle with 1 cup of warm water and add that to the glue. Stir it up until it thins out. Then add several drops of food coloring and mix that in. In a separate bowl mix the Borax and the second cup of warm water until the Borax dissolves. Stirring CONSTANTLY, slowly pour the Borax juice into the bowl of glue. Mmmm . . . glue sauce . . . yummmm! . . . Stir and stir and stir until it forms into a goopy, slimy, very cool mass at which point you can invite the kids to reach in and grab a handful. Here's a video, we call it: The Making of Flubber.

Any good ideas of what to do with an unused box of Borax? I suppose it's good in the wash. Maybe. Anyway, once again leave your links below to your other great ideas--I'm ready and waiting!

"Flubber" or "Schlop" (as we call it around here) is definitely a fun glop for kids to make and play with. It's great to keep all the ingredients on hand for those days when you have to watch someone else's kids. Makes you the 'cool' mom. :D

Borax is good for the wash. It's great for deodorizing bad smells.

looks like fun! You can save the Borax for your next batch of Flubber. :)

my husband + i camped in a borax mining area east of the sierra mountains in california. it's the original borax site as in "20 mule team". that was awhile ago + i do not remember the multitude of uses, these are from wikipedia

* component of detergents
* ingredient in enamel glazes
* component of glass, pottery, and ceramics
* fire retardant
* anti-fungal compound for fibreglass and cellulose insulation
* insecticide to kill ants and fleas
* precursor for sodium perborate monohydrate that is used in detergents, as well as for boric acid and other borates
* treatment for thrush in horses' hooves
* used to make indelible ink for dip pens by dissolving shellac into heated borax
* curing agent for snake skins

Great idea...it will be great for the days when the kids aren't in school and bored lol A fun little experiment.

And borax is great in the wash :) I also use it with water to scrub the kids mattressess once a month..makes them all fresh :)

The kids at the school I used to teach at LOVED making this stuff! It was a great science experiment for them!

My kids LOVE making this stuff! It's a great way to keep them occupied for a long while!

Too cool! We did this once many years back! Love it!

We're goning tom ake some this weekend...we're in for another deep freeze!

Oh! My kids have wanted to make that for AGES! Off to see if I have some Borax....

I have never heard of flubber! What do you do with it? Is it safe for toddlers to play with?

Wait! I'm still drooling over the polished wood floor and incredibly shiney countertop in the photo. How on earth do you do art/science projects (in addition to all the other plates you have spinning) and keep such a clean house?

I used borax in the laundry after I accidentally washed (AND DRIED) 3 crayons.

TO Jessie: (faintly) you scrub your children's mattresses once a MONTH? I have to go lie down.

The feel of homemade flubber always creeps me out, but the kids love it.

You can also use borax to make snowflakes: http://chemistry.about.com/cs/howtos/ht/boraxsnowflake.htm

I use Borax for all kinds of things! I use it to make my homemade laundry soap and my homemade dishwasher detergent (45/45/10, Borax, Baking Soda, Table Salt). Or you can just add it to the washing machine with your other detergent - it's a cleaning booster. You can use same mix for dishwasher detergent as a cleaning scrub, for your stove or countertops - AND it even got rust stains off my bathroom countertop! There's so much more. There might be suggestions on the box but I'm sure you'll find all kinds of things to do with Borax if you search online. :)

I'll have to make flubber with the kids - they'll love that! Thanks!

Flubber is awesome and one of my kids favorite things!

If you're interested in green cleaning options, here's a little pamphlet with lots of recipes for non-toxic cleaning, polishing, etc. products. Many of them call for borax. You can use up the box AND be nice to nature. :) Green Cleaning Recipes

fun! I remember confusing my students by asking them if it was a liquid or a solid. They never could answer, because it behaves like both!

Somebody at church gave some to my son to play with once and he put it in the front pocket of his white dress shirt. It was neon yellow flubber, and it oozed into the fibers of his shirt, and when they tried to take it out it got hard, and let me tell you, it was a nightmare. I eventually got most of it out with a lot of hot water and some bleach, but that shirt still has a slightly yellow tinge to the pocket area.

Use it to make more flubber, then use it in the laundry. Wash your white undies in it, then hang them on the line and they will be WHITE again. Of course, you have to wait for summer.

I spent a month last year convincing 2 kids that this was not a valid science fair project b/t they had no science to back it up, and therefore no presentation. Then we paid for some science-type people to come to the school and do hands on science with the kids and Viola! they made flubber. I asked them to explain the science behind it and they couldn't. It was very fun though.

This looks really cool. My daughter made something similar at school with corn starch. One question: how do you store it?

I, too, was wondering how you store it. I've done the homemade play dough, but Flubber is new to me. Can't wait to try it.

How fun. My kids will love this.

I love hearing how polite your kiddos are to each other. Very sweet.

Like liquid Play Dough? How cool of a mom are you?

So Cool!! Not just for my children but I am a very "tactile" person so I love playing with this kind of stuff with them. Thanks!

Yes, I do have an idea for using your leftover Borax. We also make flubber from time to time. We get big hills of fire ants (very vicious and fast!). I mix a cup of Borax with 1/2 cup of sugar - about 2 to 1 or more. I kick the ant hill and sprinkle a generous amount of the mix over it. Sometimes it takes 2 or 3 tries... but it gets rid of the ants! However, it also kills the grass for a while - so it's a trade off.

My girls would love this!! Thanks for sharing : ) I use Borax in our washing machine when my hubby's gym clothes or the dish rags are stinky!! It's also fantastic as an ant deterrent (just sprinkle along doorways/windowsills)

I just want too take time too Thank everyone for doing what you do and making the community what it is im a long time reader and first time poster so i just wanted to say thanks.