Sweaters and Hats and Rafting. Oh My. 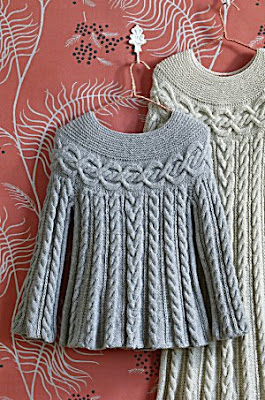 Yes I'm up late. Yes I should be in bed but I have a really good excuse--two in fact.

My latest knitting project, just in time for the approach of fall (though don't get too excited, I'm not expecting any fall weather for at least a good six weeks. At least).

I got rather excited this summer when I found the Lion Brand Yarn site (not that it's any big secret or anything) but they have all sorts of free patterns. I signed up for the newsletter and they sent a catalog to my home where I picked out this cable sweater and started it the next day.

It looks remarkably like this Victoria's Secret sweater and I'm sure I'll look just as sexy and sleek as the model in the picture. Heh . . . sure I will . . . if I say it enough times it's bound to become a reality, right? 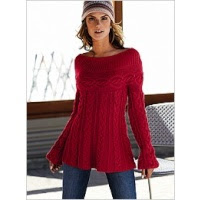 I would have had a picture of my own to show you as proof of my accomplishment except that it became a rather crazy evening full of phone calls and anxious moments. Andrew and Spencer left Wednesday morning for a Boy Scout rafting/camping trip down on the Kenai and I got a call from him last night to let me know that there had been a slight accident.

A couple of the leaders and boys had stayed up river to do some fishing but Andrew and another leader took two rafts and seven boys to head on downstream. Though they were being cautious and responsible, apparently the first boat got swept into a "sweeper" which, for you unacquainted with rafting, means a place in the river where a tree branch is stretched out into the water, catching anything in it's path and often dragging them down underwater where they get trapped. The first raft hit the sweeper and tipped, throwing four boys and the leader into the icy water where the oldest two boys were swept down even further.

Andrew saw it happen and tried very hard to avoid it but the currents were too strong and his boat followed the same path, flipping and throwing all of them into the water. Luckily they were all able to get out without being trapped underwater though it was a while before they were able to verify that the two boys who'd been swept off were safe.

By the time he called me they'd all been rescued and emergency people had shown up to make sure no one was hypothermic and that everyone was safe but I think it shook them all up a bit. Isn't it crazy how life can do that? Everything is going great then one second later you're in a life-threatening situation. It could have gone so horribly but I tell you that is what PFDs (personal flotation devices) and prayers are for. You don't go on a river without either. But after getting everyone together and regrouping they decided to continue. It'll give them something to talk about around the campfire!

Of course you know that means I'll be nervous the rest of the week until they get back home. Though I'm counting on the odds that the experience means that now that they've had one near-catastrophe their chances of having another such rare experience have gone significantly down. You know, that whole thing where if the guy next to you draws the short straw your odds of doing the same back-to-back are much lower?

Ah forget it, I'll just be glad to get them home again, though I'm sure it will make the trip memorable. Thank goodness for those life vests!

What a beautiful pattern. I look forward to seeing you modeling your sweater.

I am glad everyone is alright. I think you had your allowance of mishaps this year and the rest of the year should be accident free.

Love the sweater!! I'd like to see you modeling it too! Is it as long as the one in VS? It is beautiful!! {knowing full well that if I attempted to make it, it wouldn't be FIT to wear}.

So glad to hear everyone is safe! Between you all having accidents and this - maybe a bit of calmness is in order for a bit, eh?

Gotta wonder about those Boy Scouts...

Although Son #3 went on several high adventure trips with the troop (such as Boundary Waters and Space Camp) his favorite camping trip was the time they got caught in a flash flood. The troop was never in real danger, but their supply trailer was swept up and deposited against the side of the shelter.

Sounds like they could use a nice, cozy sweater right now. Good thing their Mama can knit like a mad woman!

The sweater is so beautiful!! I can't fathom doing something like that. You are so talented.

Beautiful sweater and I will be sure to send good thoughts to those boys on the Kenai.

Oh my gosh, I LOVE that sweater. I don't think I could ever make it though, as it took me 9 months to knit a Harry Potter scarf for my sister and I still don't know how to NOT make the edges curl.

I love rafting stories. I used to be a Canoe instructor and we called those trees 'strainers.' I was lucky enough not to have been dumped, but glad that whistles are mandatory when paddling here because I had to help many a stranded stranger get back out after a dumping.

We used to have a "turtle club" (because an upside down canoe looks like a loooong turtle shell) for kids who have been in a canoe that got tipped and some were quite proud of their membership. It's hard to get back into a dumped canoe. But don't worry about the boys - these are the BEST stories for later and if they have their PDFs they will be grand.

Scary experience! You might not sleep well until they get home. Good thing you've got knitting to keep you occupied all night.

Totally shook me up when we got the call last night. I tried to remain calm, but like you said couldn't help but wonder how life can turn around in a second. Thanks for your call and I'm sure the boys will be all macho about the whole thing even though it probable scared the begeezus out of them.

So glad everyone is alright. With all of the 'adventuring' that Scouts do, I think they are watched over a little extra.
Cool knitting!

I am so glad that hubby and the boys were safe and sound. I would agree with you that PFD's and prayers go hand in hand while rafting.

I only wish I was as talented as you. Knitting is just not my thing. Can't wait to see how yours turns out however.

That's a gorgeous jumper - that's what we call it where I'm from, 'sweater' doesn't encourage me to wear one. Who likes sweating BUT I would yours!

My mum's been knitting since she was 3 years old and this week decided to finally showcase and give away (and sell) some of her creations. Go take a look: http://handmadeinscotland.blogspot.com/

Two things: Glad all are safe and I wish I knew how to knit!

Name of sweater pattern, please? Too many at the site to find it easily!

Makes me wish I would learn how to knit. I can crochet, but that's where it ends. Very svelt!

Glad no one was seriously hurt. Things like that always make you jumpy afterwards- on high alert- and that can wear you out. I suppose you'll have a couple of very tired guys when they return. I bet they'll get extra hugs and kisses, too. ;o)

That sweater is remarkable and gorgeous and oh, oh, oh, I want one. (Perhaps a little etsy number to match my hat?) You are seriously talented.

As for the horrifying river story, I am very glad everyone is safe. But how scary!

Lummy! I did have something stunningly witty to add on the subject of Lion Brand and knitting but it's escaped me completely. Talk about nail biting experience! What a way to learn a lesson.
bestest wishes

I would like to see your final product. Love that pattern. Glad everyone is O.K.

I love the sweater, makes me wish I knitted!
I firmly believe that prayers are what keeps us going every day.

i love the sweater!

glad to hear everyone is ok. how frightening!!

Awesome sweater. And the trick to looking like that model? You have to stand like that. Go ahead, try it. Now I ask you, WHEN in your life do you ever actually stand like that?

Scary rafting story - glad everyone is OK. Sounds suspiciously like my nephew's canoeing story. What is up with the Boy Scouts?

Oh, my goodness! So glad everyone was safe, but you are right, a good story to tell their grand kids some day.

The higher than average warm weather has been melting the glaciers at a super fast rate this year and all the rivers and such are too high/flood level all across south-central Alaska. Those leaders should have done their research before even considering their plans. No offense...taking boys into that situation is stupid. I am glad they are all safe!! Hopefully that Scoutmaster thinks twice before doing that again.

Nancy A. from Two Mountains said...

Your son will have quite an experience to relate once he starts school! He'll be the envy of other boys... Glad everyone is alright but it must have been quite scary at the time.

Great pattern. My daughter would look great in one...too bad I don't knit. :)

So, now I'm getting pretty antsy. My boy still has his Web I and II years to go, but I know how fast THAT will fly. And one of our pack boys who just moved on to Boy Scouts went to camp this summer and had basically the exact same thing happen to him, except that he got trapped under the canoe and almost didn't make it out. Seems to be a Boy Scout rite of passage, and I don't like it ONE BIT. waaah. SO glad that your guys are OK!

I HAVE that sweater! It's a good style for us tall girls! But I think that knitting one is a better idea because the VS one is an acrylic mix and hasn't held up well with the washing...typical of their stuff. I can't knit so be sure to post finished photos so I can live vicariously through you!

Our family has our own frightening river story - a tubing adventure in New Guinea that nearly killed my dad. Also the route they were taking was about 3x longer than they had anticipated and they ended up spending the night on the riverbank, very unprepared, while the village searched for them. Makes for good stories - after the fact!

We had a similar rafting adventure -- or, should I say misadventure -- for my husband's birthday. Everyone was safe (thank heaven) but I share your anxiety...and gratitude.

And your sweaters are gorgeous! Wow!

Crazy. and scary. and lucky. and blessed.

and so glad that I don't have boys to go to scout camp. and a husband who is a High Priest Group Leader instead of a scoutmaster...man, i am freaking out right now.