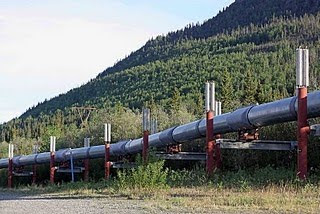 From contributing writer Kim Christopher of The Mommy Machine.

***
I was born and raised in Alaska, so I was around during the big oil heyday, back when the small town of Valdez tripled in size with engineers and security experts and boat captains and laborers of every sort working hard to get the oil terminal up and running. You see, the great Alaskan Pipeline ends at the port of Valdez, which is where the black gold is loaded onto tankers and shipped off.

Considering the horrific spill out in the Gulf of Mexico, now is probably not the best time for me to show you pictures of the Alaskan Pipeline, but I thought it might bring you comfort to see how easily it can be shot at by a drunken man. Wait. Let me rephrase that. Security is very tight along the pipeline, so if you get plastered and shoot at it, you will get caught. Lots of people have used the pipeline for target practice over the last three decades, but so far only one drunken doofus with a hunting rifle was able to cause any damage.

Oil sprayed out of the pipeline through the bullet hole and spilled all over the ground, but the inebriated idiot didn’t get away with it. He was prosecuted to the fullest extent of the law--at least I think that's how it ended. Actually, I don’t know what happened to the guy. He probably ended up working for BP on a drilling rig in the Gulf of Mexico.

The Alaskan Pipeline is 800 miles long; longer than the state of Texas, ya’ll. That’s a lot of pipeline to shoot at. It starts at Prudhoe Bay and ends at Valdez, which is a very snowy town—it’s surrounded by mountains and the annual snowfall is ridiculously enormous. I lived there as a child and my mean parents made my sister and me shovel the driveway all winter. Kids these days don’t know the meaning of hard work . . . why, you should have seen me shoveling my way to school, uphill both ways . . . wait, what was I talking about? 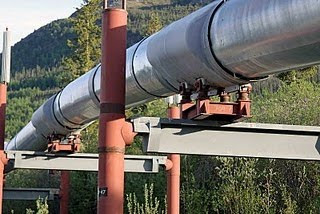 Perhaps you’re envisioning a slender pipe running underground for 800 miles, not unlike a telephone cable or the natural gasline that might connect to your house but half of the Alaskan Pipeline is above the earth, not beneath it. Part of the reason is that the ground is goofy up here, with stretches of frozen tundra and permafrost that can be adversely affected by the heat of the pipeline. It’s not only easier but less harmful to unstable soils to insulate the piping above ground. The only problem is that its protective encasement makes for a rather large structure so that, resting directly on the ground, it blocks the paths of migrating wildlife.

Can you imagine a fat mama bear with her cubs trying to jump over the pipeline? Or a gun-toting drunk man? The piping is therefore elevated several feet above ground which allows herds of caribou to migrate and vandals to stagger about unimpeded.

One might worry that an elevated structure such as the Alaskan Pipeline could be toppled by one of the 22,000 tremors that shake the 49th state each year but fortunately the engineers who designed the pipeline made sure it was built to withstand seismic activity. 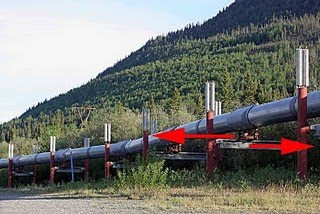 That mechanism attached to the cross beam is called a shoe assembly, and it actually slides from side to side.

Whether the ground moves because of thermal expansion or an earthquake, the pipeline is built to move along with it. Overall, the Alaskan Pipeline is quite the feat of engineering, construction, and maintenance. Nine out of ten drunks agree.

Wow - it is quite a marvel and I am not even drunk. But then, it's not going through my backyard either.

It's amazing how little I know sometimes. Thanks for an informative, fun post!!

Thanks for the pictures and information. I learned something before work today :-)

Fascinating! Thanks for the little tidbit!

I recently finished a book by Alastair Maclean called Athabasca, which deals a bit with the pipeline. Interesting reading if you like a bit of suspense and some manly heroes. =)

thanks bro for this information, visit back to Download Ebook Gratis, god bless you :)

I never knew most of that--thanks for sharing!

Well that's why they make the big bucks. Those engineers think of the staggering drunk men and earthquakes and permafrost that most of us wouldn't consider.

Thanks for sharing about the Pipeline! This was such a funny post to read.

My husband grew up in Valdez too. :) I remember the pipeline getting shot at too.

I was in Anchorage as a child while dad worked the North Slope. I remember a lot about the pipeline. We were some of those migratory Texans that came to Alaska. Just to note: y'all is a contraction of YOU and ALL so the apostrophe comes after the Y. Y'ALL. Just a little Texas talk for you... :)

I have been schooled. And by a TEXAN. Oh, the humiliation ; ) Thank you, Teresa!

Never heard of the title Athabaska until you mentioned it, Carina—thanks for the tip!

And thanks for all the great comments from the rest of y'all (see? I'm a quick learner!)

Cool pictures and a very informative post. =]
As always you write it well and make me lol when I read your posts. =]
Off to catch the rest, I am a few days behind. =\