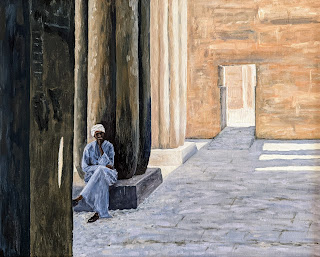 You can’t get Egyptian money in the United States. What I mean is, you can’t order any bills through the bank or a currency service, you have to wait until you get there to exchange currency. This causes a little bit of a problem because you need cash in Egypt–lots of it, in small 10 or 20 Egyptian pound notes–otherwise you can’t get much done in a place run by baksheesh.

Tipping arouses strong feelings in America. We are a freedom-loving people, resentful of  authority and happily married to capitalism so just tell us what it costs and we’ll either buy it or we won’t. Don’t try to extort more from us. A purchase isn’t a nuanced dance of negotiation, it’s a black-and-white contract where you have what I want and if I want it bad enough I’ll pay you the agreed upon purchase price. Don’t come back with your hand out, telling me the deal wasn’t enough.

Regardless of whether you call it a well-deserved bonus for a job well done or panhandling, tipping is everywhere in the States so that when I travel to other places and find that they generally don’t have the same tipping customs I do a dance of joy because the vacation just got that much easier. To know there’s no expectation of more once you’ve paid the tab or got out of the taxi is a relief . . . but not in Egypt.

Tips are expected for everything. Cabbies, waiters, doormen, concierge, airport personnel, bathroom cleaners, docents, that guy on the street who gives you directions . . . it does not end.

We were in Edfu, forced to take a carriage from the pier to the temple of Horemheb, as provided and previously agreed upon by the cruise director. As we left our boat we were told that it was customary to tip the carriage driver with about 10 pounds. Putting aside the experience of careening through the streets of Edfu behind a slathering, cantering horse with a driver who would twist in his seat to smile sycophantically and repeat “America number one!” Putting that aside, when we were done we did as had been suggested and handed the driver a bill. By this time Andrew had learned the art of folding money into a tight package in the palm of his right hand so that he could shake hands and say, “Thank you very much” then stealthily discharge the money like a spy making a hand off of nuclear secrets on microfilm.

Bad news though, this apparently wasn’t enough and the driver got angry, discharging his own stream of abuse at us as we fled for the pier. He felt cheated, we felt cheated, it was an exchange that left everyone unhappy.

We were in the Cairo airport waiting for our flight to Frankfurt and completely out of Egyptian cash–and we’d timed it that way since you can’t exchange it once you leave, if you recall.

Sitting in the waiting area at the gate Andrew needed to use the restroom. An airport worker with a large cleaning cart was hanging around listlessly and, when Andrew emerged from the bathroom, angrily demanded a tip. I watched it go down and as Andrew returned to his seat I braced myself for more confrontation. The only thing we had going for us was that the worker was in a predicament: if he left his post to chase Andrew down he’d miss the others coming out. How much was it worth to run down the American?

Egypt takes its tipping so seriously it’s developed a whole new system around it: baksheesh, which is really just tipping on steroids and it doesn’t help that to Egyptians, we Americans look like a pile of money on two legs. The United States is some vague thing that represents money and privilege and we Americans are easy to spot (or hear). But then, Egypt has been hit hard in recent years and tourists have been a trickle of what they once were before the Arab Spring and Mosi arrived on the scene. Add to that COVID and the country is desperate for tourists and will do everything they can to present a pleasant and safety-conscious face to the world, begging the West to return and bring money with them. 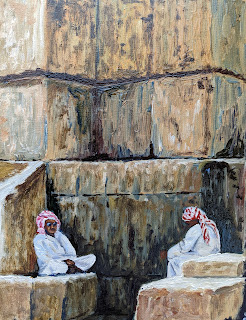 So besides wanting to keep Americans extra protected, able to tell stories back home about how wonderfully safe and accommodating Egypt is, the police generally don’t want us to go home complaining about being hassled for bribes. And then it also helps to feign ignorance with an appropriate, “No habla Anglais” shrug when someone approaches you with his hand out because for all their audacity, the transaction has to be done on the sly or it looks bad.

We had hired a cab to take us from our hotel in Cairo to a building in Maadi where we’d attend church. We scheduled the pickup with plenty of time and because of the traffic around the hotel lobby we decided to walk out 100 yards to meet our driver at the entrance. We loaded into the van and settled ourselves and were approached by a white-uniformed police officer who gestured to Hassan to roll down his window. Serious discussion ensued though I didn’t pay that much attention–I’ve learned that I’m terrible at properly interpreting emotions through the intonations of language so I tuned most of it out until it ran on longer than was normal. Soon papers were being passed through the open window and more discussion followed and Hassan seemed rather sheepish and submissive.

What was going on? The officer walked away to his booth to examine the papers and Hassan turned around in his seat.

“If they ask you, you are Australians.”

That didn’t sit well with my father, who quickly pointed out that he’d made it a habit never to lie to the police and my attorney husband instantly agreed. Me? I was ready to throw a shrimp on the barby with a hardy “G’day!”

In the end it took us ten or so minutes to get them to let us go, by which time Dad was convinced they had it in for Americans and that we should stick to the story of being “from Alaska” because even most Americans couldn’t locate that on a map and it would preserve our integrity, but it turns out that it was actually the opposite.

Hassan—or rather our friend Aton who owned the van—hadn’t filed his paperwork properly. The government likes to know exactly where Americans are being shuttled, not for sinister reasons but out of an abundance of caution. Who wants to tangle with the Americans if some of their kind should happen to get themselves into trouble somewhere? Keep track of them and keep them safe. Aton had been lazy and didn’t want to file and the police were ticked that he’d cut corners. I imagine some baksheesh solved the problem because we were soon on our way.

We were in the Cairo airport halfway through the trip, traveling to Luxor, when we had to go through the security metal detectors. We were behind what appeared to be a wealthy Egyptian man of about 65, wearing a djellaba and accompanied by his son who looked to be a young professional. We put our things on the conveyor belt and waited our turn, watching the bags closely in case someone should try something.

It only caught my attention after the third time that the old man couldn’t get through the detector. The security people kept sending him through and I wondered what was setting off the machine. Then, on the fourth try I saw the man reach into his pocket and pull out a wad of bills. He handed a few over to the security guards and walked through without a hitch.

“Did you see that?” I hissed at Andrew, “They just shook him down!”

Knowing it was our turn I wondered what we could expect. With the commotion the old guy had caused we took advantage of things and slipped through, reaching for our bags on the other side. A guard at my shoulder stopped me.

“Boarding pass!” he said firmly. A big red flag, because you can’t get your domestic boarding passes before you get to the airport, you have to get them once you’re inside and at the airline check-in desk. But I’m sure he knew that, we were only at the front entrance. I thought quickly.

“They’re in my bag,” I said, wanting to get to my bags as soon as I could and buying for time.

Stuff was still going on with the old man and his son and  it was enough of a distraction that I made it to my bag and had it ready to wheel off a second later. Andrew was right behind me.

“Grab your stuff quick!” I whispered. “I think they’re going to want money.”

And quick enough, we got through and were off before they realized it. I figured if anyone questioned us I could play stupid as if I didn’t know what was going on, which is what Dad did when he and Mom came through right behind us. Security tried to hassle him a bit but he’s big and imposing and pretty much shrugged them off as if he didn’t understand. About that time a police officer wandered by and saw what was happening, dressing down airport security and letting us through without further incident.

But that’s business as usual in Egypt. The Egyptian gentleman didn’t seem particularly surprised or ruffled by the experience. Prepared, you might say. But then life there seems to nod to those things outside of one’s control, exemplified in the phrase inshallah--God willing. You hear it everywhere, sometimes simply as punctuation.

“What are you studying at university?”

“Is your daughter still seeing Abdul?”

“Yes, they’re to be married after Ramadan, inshallah.”

“I’ve got to get to the dry cleaners after work. Inshallah.”

To Americans baksheesh is a graft, a bribe, and we’re galled by the audacity and corruption but in Egypt it’s de rigueur–part of the economic structure–so why fight it?

“Did you enjoy your trip? How was Egypt?”

“We loved it! It’s a great place to visit. Inshallah.”