How to Make Corn Husk Dolls 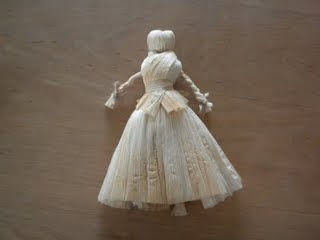 We made these old-fashioned dolls this weekend and they were a big hit.

I keep thinking this one needs a cute little bonnet and she'd be perfect . . . she's been christened "Rosie" by our friend Emily across the street.

Here are step-by-step instructions on making your own, the only thing you need is some twine and some corn husks. If you're like me, you don't exactly have corn growing out back so the easiest thing to do is to go to the Mexican section of the supermarket and get a packet of dried corn husks for about two dollars. 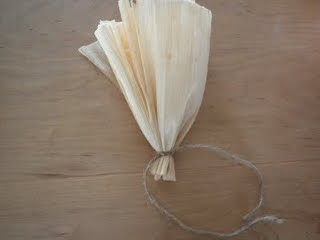 Remember the tamales from last week? Well one package of corn husks makes more than enough so we used the leftover husks for the dolls.

You'll need about a dozen husks per doll, more or less, and several feet of twine. Soak the husks in warm water for about ten minutes then pat them dry and go to work.

1. Take about six or so corn husks and tie them together like you see here at the left.

Make sure the twine pulls together nice and tight.

Once you've got the knot tight, flip the corn husks down over the string and the knot then tie them with another string just below where the knot is hidden underneath so that it forms a head. 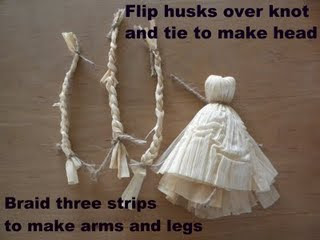 See? It's already starting to come together.

So now you have a head and some limbs.

3. Now, to make the body, divide the husks under the head/neck into two sections cross-wise.

Lay one of the braided pieces in the middle, across the body as if to make a cross shape but what you're doing is forming arms off of the body. 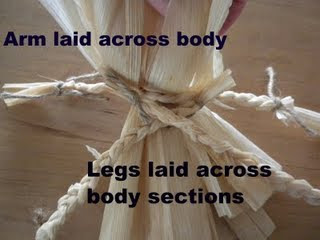 Then lay the two leg pieces right underneath where the arms cross like you see in the picture here. Then, let the husks down again and tie a piece of string around the body under the braids and catching them into the body to form a waist.


4. Now that your doll has a head, arms, legs and a waist gather another four or five corn husks around the waist, but this time tie them on upside down like you see here in the picture, so that they're covering up the torso.

Tie the bundle with twine and secure. 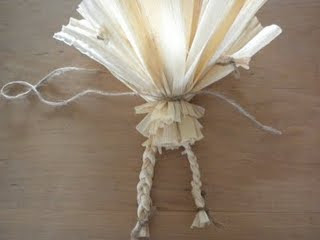 Once it's tight, trim the twine and pull the husks back down so that they form a skirt for your doll. Hide those scrawny legs.

5. Finally, now that you've got head, torso and skirt formed you can take a two long sections of husks (and if you don't have a long enough piece you can always knot two together as I did here).

Repeat using the other section of husk but going from the opposite side (left side of waist, over the right shoulder, then back down to the left side of the waist) so that it cross like you see in the top picture. 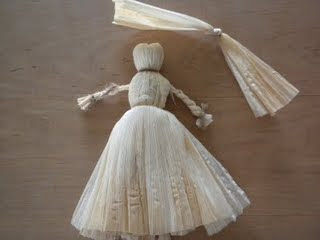 And you're done! A perfect little corn husk doll perfect for play or decoration. A garland of these would be pretty for fall.

These look super fun to make. I would like to add some kind of metallic pipe cleaner to make a halo and make angels for the Christmas tree.

Thanks for another family fun tip!

I just pulled some corn husks that we gathered from the corn maze last month out of the back of my van THIS MORNING. I was going to look up corn husk dolls this afternoon. Seriously.

Yours turned out beautifully.
Thank you for sharing!

I know this is supposed to be an easy thing to do. But I've tried it and believe me, you would never know what they were. I failed at doll making 101. Ugh. Thankfully I have a son and he doesn't mind.

She's adorable! You're so creative! Is creativity a prerequisite for living in Alaska?

Michelle,
Having grown up on a farm in Iowa, we always had an abundance of cornhusks. We had to put them in a weak bleach solution to make them as pretty as the ones in your picture. (Nasty mildew) I have made several cornhusk dolls in my lifetime, and since I have three girls we have made a number of dolls of different types. I just realized that I have never done this craft with my girls. I feel very remiss. I will have to get busy and make up for lost time. Thank you for the reminder and the instructions and pictures.

Very nice! We had to make these in fourth grade, but yours are so much nicer. Maybe I'll try them out with my daughter.

If the husks are fresh from my mom-in-law's garden, they don't need to be soaked, right?

These would be perfect for a pet bird toy.

We made these once at a church pioneer party, but I don't remember them being so very pretty.

A true artform, for sure.

I remember making these in elementary school - it was so much fun!